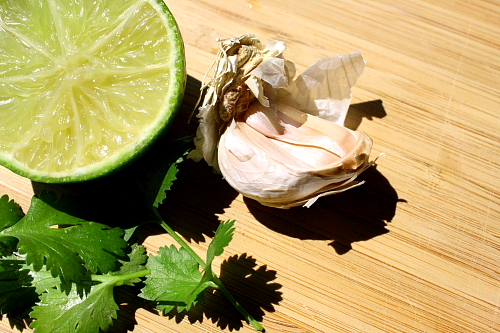 I’m not the best authority on food photography, and my pictures are far from perfect, but I have taken several photography courses over the years. Throw me in a darkroom, even ask me to develop my own film, but don’t ask me to get much accomplished on Photoshop. Suffice to say that I have basic SLR photography skills but I’m still learning about the digital editing side of it all.

That said, here are my top 10 tips for other amateaur food photographers out there.

1. Get a good camera. I use a Canon EOS Rebel XS. It’s a good beginner’s SLR camera that features several settings, including manual (where you set the aperture, shutter speed—more on that to come) and automatic (point and shoot). I’ve heard from several people that this is the best camera in it’s class, and CNET agrees, at least in terms of picture quality. I’ve also had great experience with other Canon cameras.

2. The flash is NOT your friend. First of all you shouldn’t (Read: Can’t) use a flash in restaurants when taking pictures (except for maybe in the ask-the-waiter-for-a-group-picture scenario). More importantly however, the flash will NOT flatter your food. Here’s an example of how a flash can make a beautiful dish look horrendous: 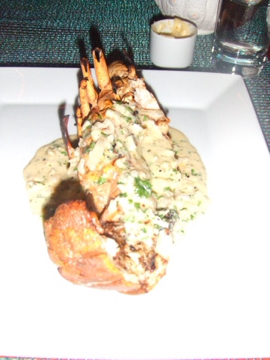 AHHH!! Attack of the killer lobster covered in … what is that stuff?? Actually, it was a delicious beurre blanc sauce, but you’d never know by looking at this photo.

3. Don’t shy away from Manual labor. Your digital SLR may have a million settings and buttons you know nothing about (and may never use). If you do nothing else, set your camera to manual (usually a big “M” on the settings knob on the top of the camera) and experiment with shutter speed and aperture.

In order to get the optimal shot, you’ll need to adjust shutter speed depending on the amount of light where you are shooting. In dark restaurants, for example, you’ll need a much slower shutter speed. Anything slower than 1/30 of a second and your picture may be a little blurry, unless you have very steady hands. In these situations you may want to use a tripod. Although not at the dinner table, please.

High shutter speeds are also needed to capture sharp actions shots, but unless your food is sprinting across the table and leaping over salt and pepper shakers, this point is irrelevant.

Aperture is the other variable that regulates the amount of light that reaches your camera’s image sensor. The lower the number, the higher the exposure.

Aperture is also directly related to depth of field. A short depth of field is the result of a wide aperture (smaller number setting). You know those pictures that have a great sharp foreground and a pleasantly blurry background? Chances are the aperture was wide (around a 4.5 to 9). Here’s an example: 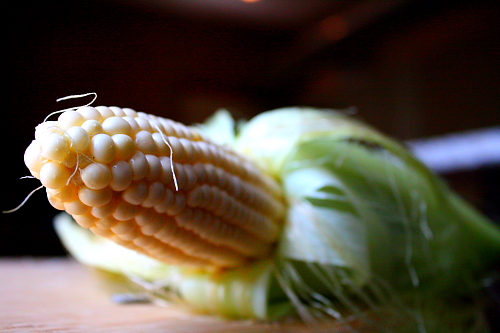 Beautiful isn’t it? I think so. You’ll see this effect a lot in food photography, for two reasons: A) a wider aperture is often necessary in low-light situations, and B) it makes the food look all pretty and whimsy. Your camera will have a meter that will tell you when the aperture and shutter speed settings will produce an optimal exposure. Experiment with different combos. In my photography classes, we were required to note these so we could reproduce the shot/effect. Not a bad habit to get into.

4. Keep your composure. Composition can make or break a picture (as many of you whose photos have been rejected from TasteSpotting know all too well). I play around with the composition of  my shots, but I really like shots where the main focal point/s is slightly off-center like this one: 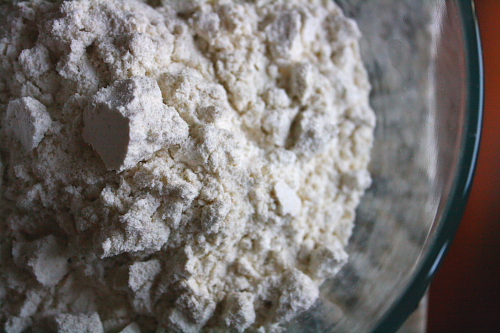 I also like to take pictures where the focal points seem to fade off into the background (back to the aperture thing) like this one: 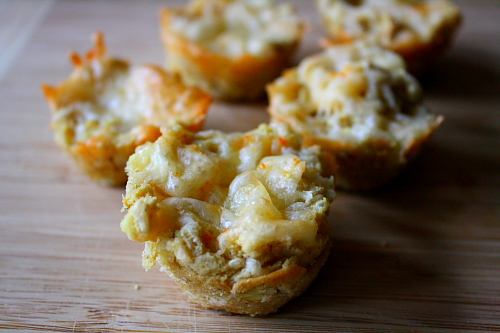 And I almost always take at least one shot directly from above, sometimes slightly off-center, like the first example of the masa flour above.

Also, get in as close as possible. We want to see the ground pepper granules on top of that shiny fried egg.

5.  Use pretty dishes. Seriously. This may seem like a no-brainer, but I’m throwing it out there. ALL of the dishes you see in my photographs were purchased at thrift shops for no more than $1.50 a piece. I also like to take pictures on my wooden cutting board because I think it looks pretty and rustic, like I’m cooking on a farm and using fresh eggs from my backyard chicken coop or something. I’ve also used the exposed brick in my apartment as a pretty background.

6. Dress up your dishes. No, I don’t actually place a strategic dollop of sauce and a sprig of cilantro on every dish I plop in front of my diners, but it sure looks good in a photograph. It easier to do if you grow your own garnishes, which I do. If I can do it from the inside of my tiny 4th floor condo, so can you.

7. Artificial enhancement isn’t a bad thing. You don’t have to be a Photoshop expert to do it. I use the program that came with my camera, which allows me to adjust the brightness, contrast, saturation, sharpness and hue. Sometimes I use it simply to make images look better, as was the case in this before and after: 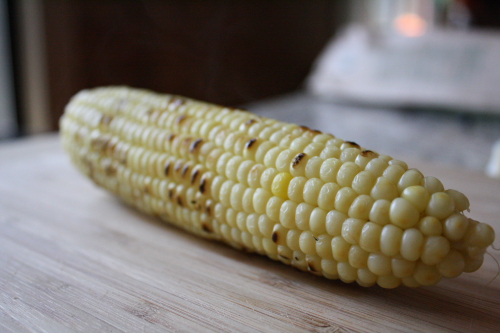 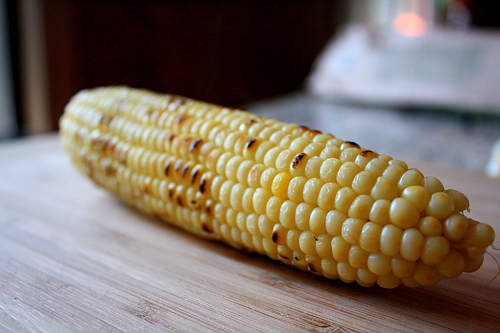 You can also create really cool stylized images like this one: 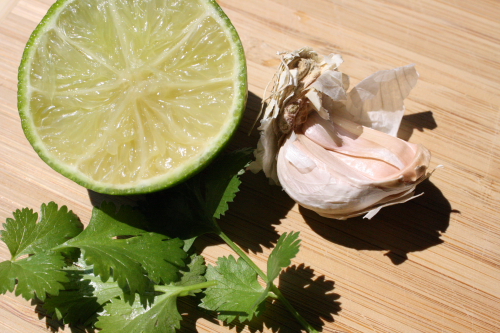 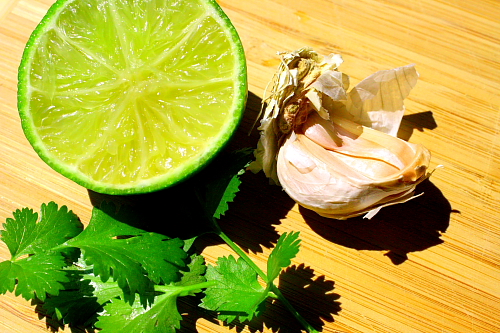 I also use this program to crop photos.

8. Keep color in mind when cooking. Colorful food is healthy (unless we’re talking about Cheetos) and it also photographs better. If your dish is a little drab, dress it up with garnishes, or put it on a colorful plate. Here’s a good example: 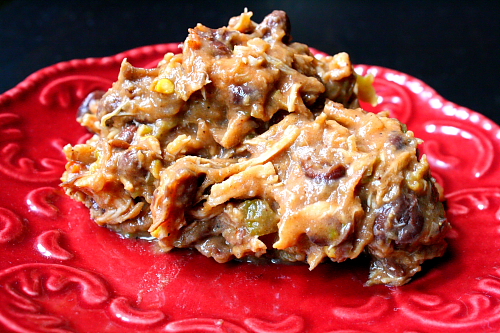 This shredded chicken is a not-so-pretty brown color (although I did brighten it up by adjusting the hue and saturation) but the plate makes the picture pop.

9. Don’t put all your eggs in one photographic basket. I take LOTS of shots of my food. The more shots you take, the more chances you have of getting the perfect picture. Plus, in the age of digital, there’s no reason not to. Except at restaurants of course, where you may get some nasty stares from fellow diners.

10. Imperfection is interesting. The shots of meticulously done pastries in Martha Stewart Living are great and all. But don’t strive for this insane level of perfection. Sometimes imperfection is pretty. These little corn muffins are a little “loppy” as Dave would say … 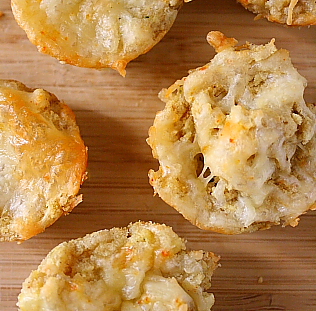 … but they look pretty delicious to me.

Hope this post helped, but just in case you want some additional sources, here are a few more good articles on the topic:

Do you have any food photography tips? 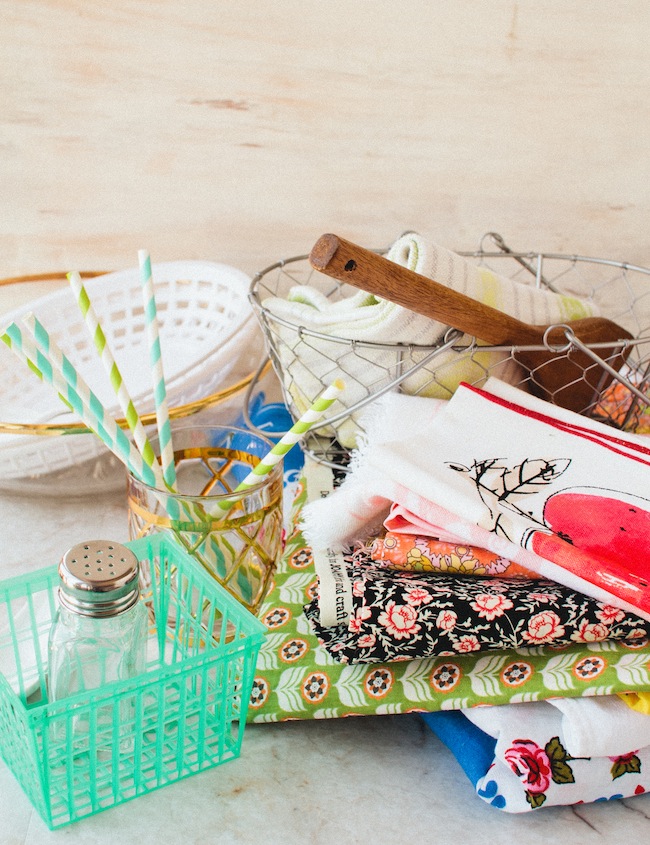 Photo Files: Confessions of a prop-aholic 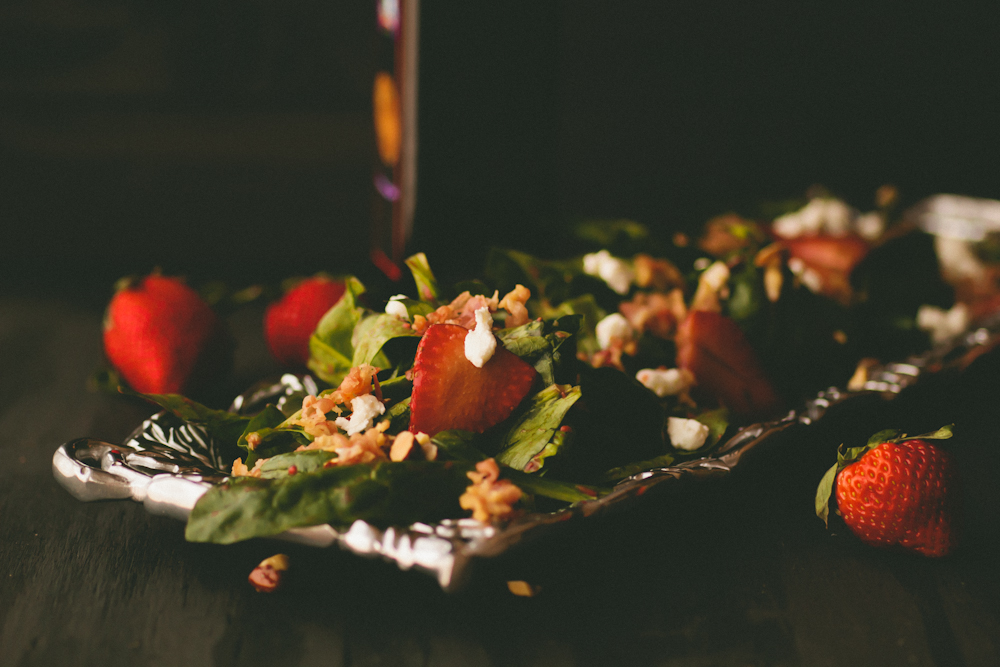 Getting in the mood 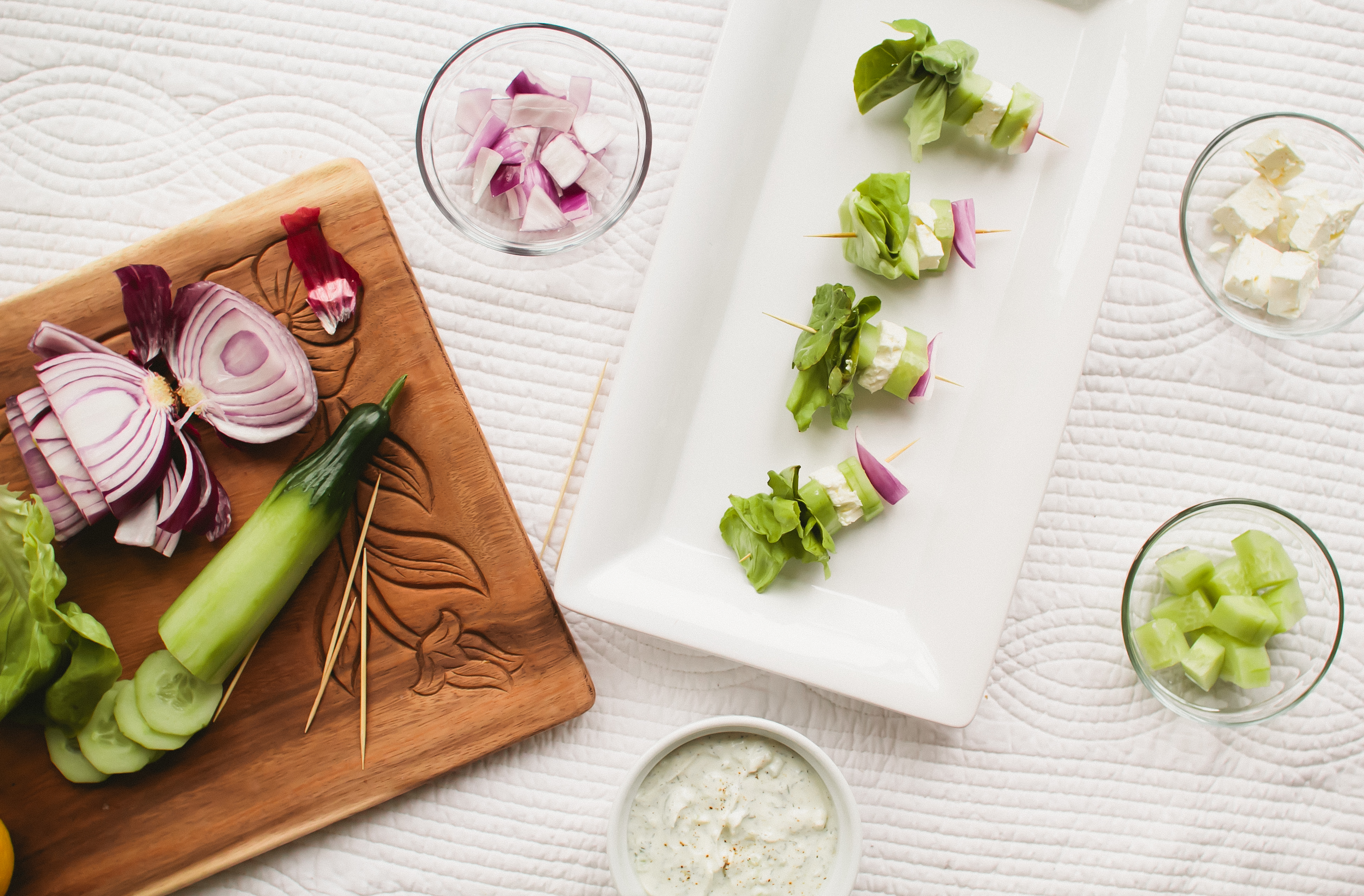