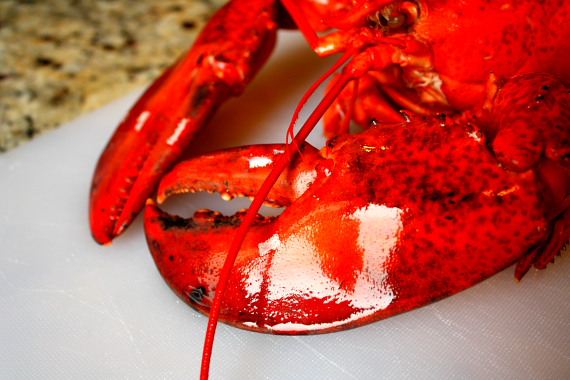 Dave and I have been together five years this month. We’ve had some great times, travelled to some amazing places and are closer and more in love than ever. But enough with the mushy stuff—you don’t really want to hear about that anyway—let’s get to the good part: the food.

I’m a part of this month’s Foodbuzz 24, 24, 24, and I decided to do a five-course anniversary meal—celebrating each year of our relationship with a memorable dish from that year.

Four grocery stores, one fish market, four hours of shopping, and nine hours of cooking later, we sat down to eat five years of memories to the mellow tunes of John Mayer’s Continuum album. 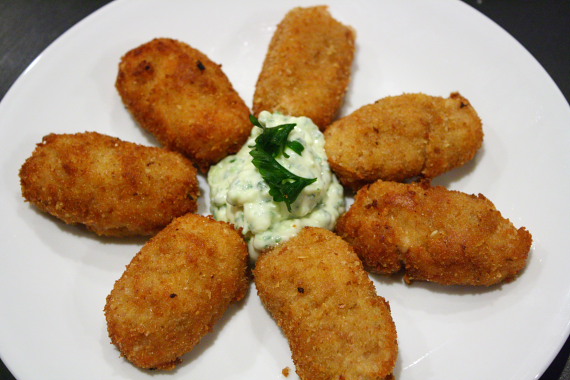 These little golden-fried beauties were inspired by our time in Spain, when Dave came to visit me during my study abroad stint our first year together. 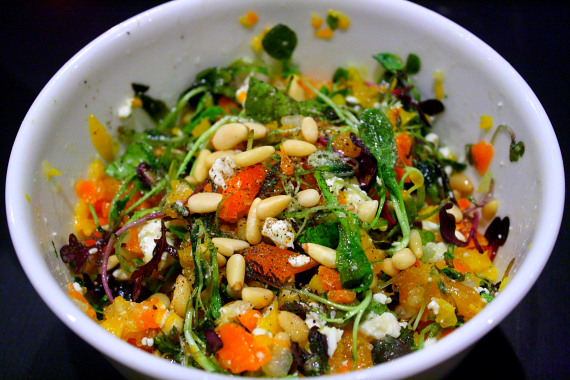 I LOOOOVE this salad. Surprisingly, so does Dave. I say surprisingly because Dave is a caesar-salad-only kind of guy. This recipe, an original from my momma, has all sorts of ingredients that Dave “doesn’t like.” I made this for him during our second year together when he was still too polite to turn down any of my food. In fact, this salad was a part of the one of the first meals I ever made for him. It’s also special because it marks the first time Dave trusted my culinary intuition, even though he thought he wouldn’t like it. I’ll take some of the credit for making him a more adventurous eater, thank you very much. Since then, he’ll (tentatively) try almost every single dish I put in front of him, even the veggie-heavy ones. 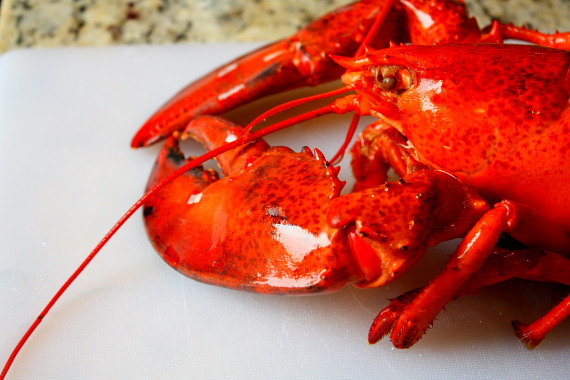 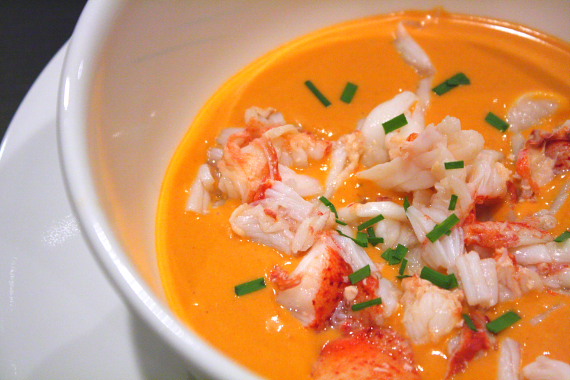 Dave and I LOVE us some lobster bisque. Our third year together we had two of the best lobster bisques I’ve ever had, from Capital Grille and Tru.

Recreating this was quite a task—one of the most daunting I’ve ever taken on. First of all, I endured a giant rush of guilt and a massive case of the willies every time I opened the fridge and saw the lobster’s paper bag staring back at me. I have no problem eating something that was once alive, I’d just prefer that someone else do the dirty work for me. I didn’t have a choice in this case. As far as I know, the only lobster you can get on short notice in Chicago is one that’s alive and thrashing.

I read up on everything from lobster hypnosis (seriously) to a swift slicing between the eyes as ways to humanely kill lobster. In fact, the jury is still out as to whether or not they can feel actually pain.

In the end, I popped him in the freezer for a couple minutes, which seemed to calm him, or freeze him just enough to prevent movement, and plunged him head first into boiling salt water.

Then, in a moment of poor judgment, I lifted the lid off the pot, only to see him writhing around in there as he boiled to death. Completely awful.

The torture ended for the lobster about a minute or so later—mine endured for hours longer.

Dismembering and pulling out the lobster meat was the next unpleasant undertaking. Never mind that I was squeamish about pulling apart something I had just killed. That was a walk in the park compared to dealing with the ungodly mess that splattered all over my face and spilled out on to the kitchen counter and floor when I pulled the legs off cut the lobster’s body open. *Shudder*

I breathed a sigh of relief when it was all over. Little did I know, my aggravation was far from over.

After I cooked and pureed the bisque, I decided to run it through a super-fine mesh strainer to get the smooth and silky texture of a good restaurant lobster bisque. I’d compare this process to squeezing dozens of tiny key limes by hand just to get a few ounces of juice for a margarita (Which I’ve also done. What the hell is wrong with me?) In the end, about five cups of puree resulted in about half as much bisque.

Saying that my blood, sweat and tears went into this dish would almost be a literal interpretation.

In the end, it was all worth it. The bisque was truly restaurant quality—silky, rich, with a spot-on flavor and huge chunks of sweet, tender, juicy lobster meat. And it was Dave’s favorite dish of the night.

But if I make this dish again, I must be a masochist. 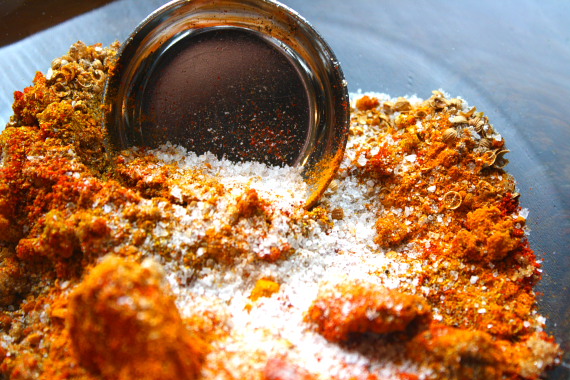 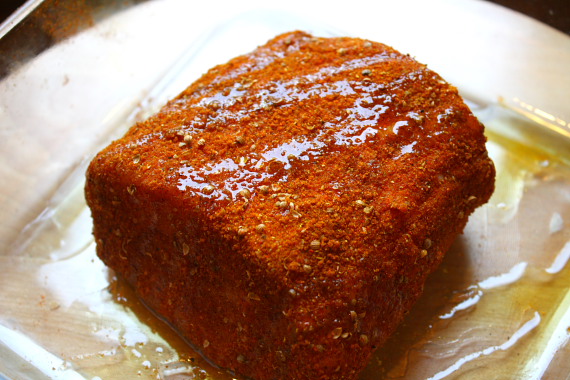 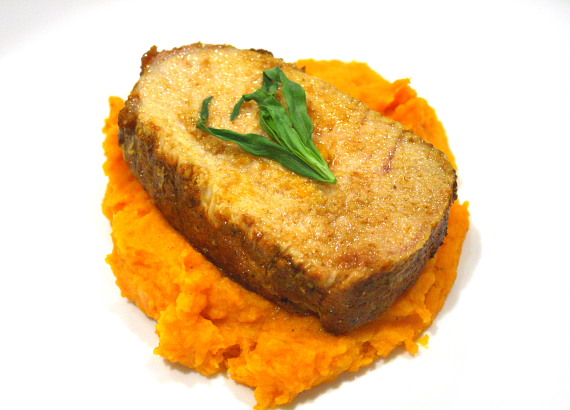 This was a dish we ate at Veya, a fantastic restaurant on the island of Anguilla in the British West Indies. This vacation (and the food we ate there) was so incredible, we’re going back again this year. Knowing a local with a fabulous house by the beach has its perks. See you in December Neal!

The dessert course is (surprise, surprise!) a Rick Bayless recipe. Remember the chocolate pecan pie that I said would change your life?? I first had it on my birthday this year at Frontera. Lucky for me, I didn’t have to play around and hope to come close to recreating it—the recipe is online. It turned out fabulously. Rick would be proud. 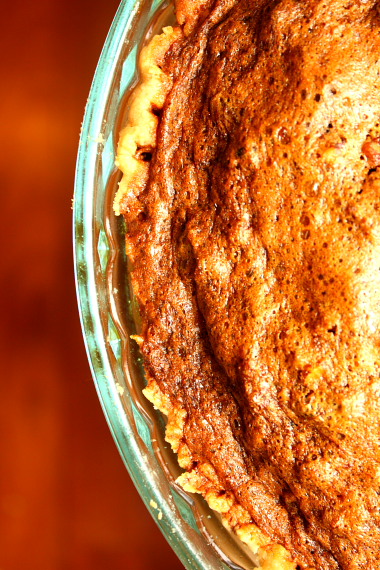 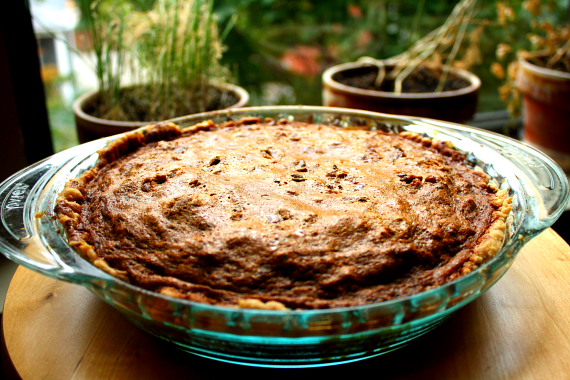 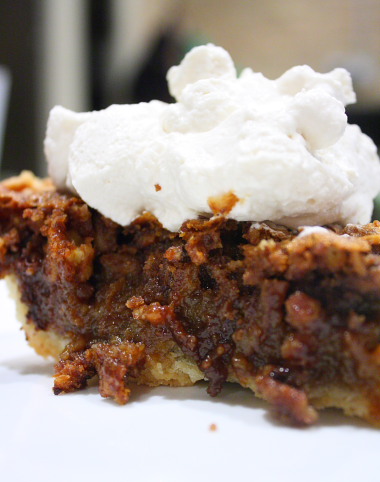 The meal was a perfect celebration of our anniversary. After all, there’s some truth in the saying, “The way to a man’s heart is through his stomach.”

Cook the finely chopped ham in the vegetable oil in a sauce pan or skillet. Remove and set aside. Using the same pan, melt the butter and stir in the flour. Bit by bit, incorporate the milk, constantly stirring and reducing the sauce until it is very thick. Stir in the cheese and ham. Season with salt and pepper to taste. Spread the mixture in a baking dish and allow to cool for two hours. Form croquette shapes using two tablespoons and your hands. Cover the croquettes in bread crumbs, dip in the beaten eggs, then again in the bread crumbs. Store in the fridge or freezer and chill thoroughly before deep frying until golden brown. Serve with garlic and parsley aioli (mayo, minced garlic and parsley).

about 2 cups (or one small carton) microgreens (the only place I’ve ever found these is Trader Joe’s. You can use spinach, arugula or mixed spring greens as a substitute)

1 half of a yellow bell pepper, chopped finely

1 half of an orange bell pepper, chopped finely

1 half of a small onion, chopped finely

Mix all ingredients together and toss to coat everything.

Lobster bisque (adapted from recipe from The Signature Room)

Cook the lobster in boiling water for 8-10 minutes, depending on the size. Pull the lobster out with tongs and put in ice water to cool. Pull the meat from the lobster and store in an air-tight container in the refrigerator until ready to use.

Cook the vegetables in the butter in a large pot. Add the tomato paste, stir to coat the vegetables. Add in the white wine, vanilla and brandy and cook until the alcohol smell starts to dissipate and the mixture smells sweet. Stir in the rice and lobster stock and reduce. Stir in the cream and reduce again. Continue to cook, stirring periodically, until the mixture is thick and the vegetables are cooked through. Add the tarragon and puree the mixture in a blender or food processor and strain with a fine mesh strainer. Add the lobster and reheat in a pot over the stove or in the microwave. Top with chives and serve.

Rub the pork in the spice rub and drizzle with olive oil. Let sit overnight or for several hours in the fridge. Brown in a skillet and finish off in a 350-degree oven until the internal temp of the tenderloin reached 145-150 degrees. Let sit for at least ten minutes before cutting and serving.

To make the puree, peel and chop the carrots, sweet potato and onion and cook in the butter and chicken broth until vegetables are soft. Puree and season to taste. Serve hot topped with a slice of pork.

For the crust, combine all ingredients except for the ice water in a food processor, but don’t over process–you want little beads of butter and shortening in the dough. Mix in ice water, again being careful not to over-process. Form into a disk and refrigerate for one hour. Roll out into a 12 inch disk and form to a pie dish. Pre-bake, with foil over the crust and weighted down by pie weights, beans or another oven-safe dish at 400 degrees for 15 minutes. Remove foil and weights, reduce the temperature to 350 degrees and bake for another 10 minutes. Remove and cool.

For the filling, crush the toasted pecan halves and mix in the chocolate and flour. Whip the butter and sugar for 5 minutes in a mixer until light and fluffy. Beat in eggs, one at a time. Beat in the remaining filing ingredients and mix in the chocolate/pecan mixture. Pour mixture into the pie crust and bake at 350 degrees for one hour or until the center of the pie is completely set (not jiggly).

Whip all ingredients for the whipping cream until light and fluffy. Top each pie slice with a dollop.