Anything with the word “fried” in it is good in my book. Anything fried in freshly rendered bacon fat is even better. Our new weekend obsession is a heart blockage waiting to happen, but I’ll risk a triple bypass later in life for this baby.

What makes this recipe special are the individual ingredients—so don’t skimp on quality. 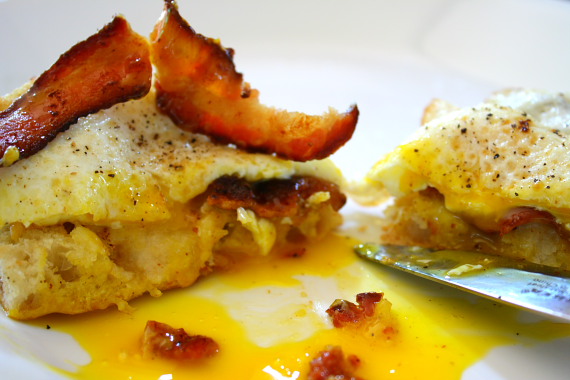 First, cook the bacon in a skillet and set aside on a paper towel. Leave enough of the bacon fat in the pan to fry your egg/s. Put your bread under the broiler with a slice of cheese on each slice. Meanwhile, crack the egg in a bowl and then carefully pour the egg on the hot skillet. Using a silicone spatula, center the yolk and let the white set for a minute or so. Carefully flip the egg—doing this without breaking the yolk is a little tricky. This is also a lesson in multi-tasking—don’t forget about your bread under the broiler. Take the bread out and arrange the bacon on top. Once the egg has cooked for 30-60 seconds on the second side, carefully slide the egg on top of the bread and bacon. Sprinkle with salt and freshly ground pepper. I like this as an open-faced sandwich because it’s easier to eat with a fork and knife. Either way it’s a phenomenal way to start a Sunday. Or any other day that ends with a Y. 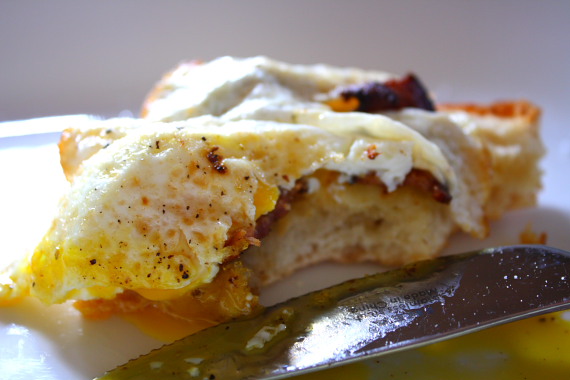